You're never too old to learn

Tim Davies-Colley, Executive Project Manager, welcomed everyone to the graduation of 41 families on Course 61 on Wednesday 1 April 2015. He reminded us that Computers in Homes started in Porirua fifteen years ago with the formation of the e-Learning Trust (otherwise known as Porirua City Community IT Educational Trust). e-Learning Porirua is now affiliated with the 20/20 Communication Trust, which manages Computers in Homes for the whole of New Zealand.

Before speaking to the graduates, Graham introduced Gary Simpson, Chief Executive of Porirua City Council, and Wendy Betteridge, one of the Trustees of e-Learning Trust.

Graham told the graduates that it didn’t matter how many graduations he came to, he always felt thrilled and excited to experience the changes that the programme made in people’s lives. The 41 families graduating today would take the total number of families who have graduated to 1755.

Graham reinforced the objectives of the Trust namely to give all graduates computer skills to enable them to apply for a job, and be successful in getting that job - not just any job, but one that pays well in our modern economy. He stressed that having a computer in their homes would also be good for their children. It would help them to access information to do their homework and it will lift their education attainment levels, so that they will be equipped to go on to higher education and, in turn, get a well-paid job.

‘Thanks to your new skills’, he said, ‘you will be able to apply for and obtain jobs at higher pay rates above the minimum, with associated responsibilities. This will enable you to participate in our society in ways in which you can make a difference. And it will lift your standard of living’ he said.

‘I want to congratulate each of you. We are so proud of your achievement. We know this will make a big difference to your lives and your future, and to your children’s future’.

Graham reminded us that there are still 200,000 homes in New Zealand without access to the internet and 62,000 of those have dependent children. ‘There are approximately 300,000 homes across the whole country without a computer’, said Graham. ‘In Porirua there are over 1100 families with dependent children without an internet connection, and many more without a computer. So there’s a long way to go to close the digital divide. These children are disadvantaged without a home computer and the internet’.

Graham acknowledged the work of the Trustees who all live or work in Porirua, and who give their time voluntarily to administer the Trust and to raise the money to run this project. There were gasps around the room as he told graduates that the cost to the Trust of providing the training, the computers, the technical support and the administration involved is close to $3000 for each family.

He then invited Gary Simpson, a resident of Porirua and the Chief Executive of the Porirua City, to come forward and say a few words to the Graduates before presenting them with their certificates.

He said, ‘Gary and the Council have been great supporters of our Trust and the work we have been and still are doing since we began. And I would like to acknowledge this and thank him, the Mayor and the Council, for their support and the combined efforts to make this a digital city’.

Gary Simpson spoke of his own experience of buying his first computer. He took it home and unpacked it, set it up, got it going and then spent hours wondering how to turn it off. At midnight he still hadn’t solved it and was afraid to experiment unless he blew it up. He congratulated the graduates for the effort they had put in and wished them all the best for their futures. 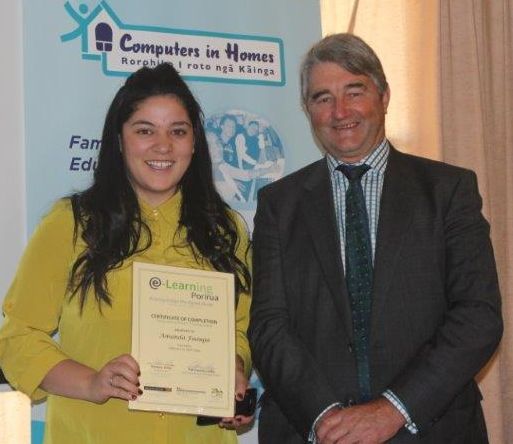 Following the presentation of the certificates (like this one to Amanda Faauga) Tim announced the names of those who had written ‘winning stories’ about their feelings before embarking on the programme and their thoughts about what they had achieved. He asked Peter Lynch, one of the tutors, to present prizes to the winners.

Four graduates’ stories were highly commended and were each awarded a 16Gb USB flash drive. They were: 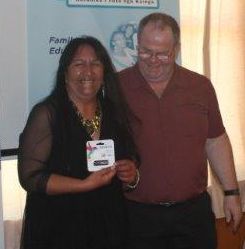 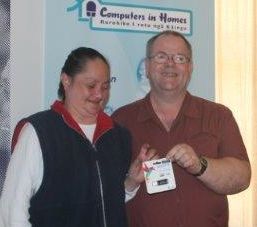 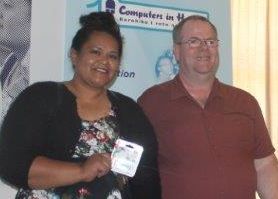 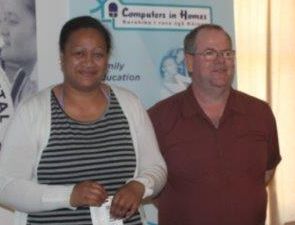 The prize for the writer of the best ‘learning story’ was awarded a web cam and microphone with a head set. This went to Daphne Swinton. 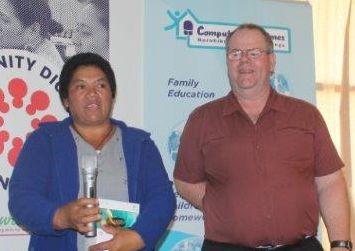 In receiving her award, Daphne said, ‘I just want to thank everyone who was on this course today. I recommend this course to everyone in our community and nationwide. I am out there advertising you!’

Daphne had prepared a wonderful Power Point presentation with loads of photos. She wrote:

‘Kia ora my name is Daphne Swinton and I heard about this course through associates. I am interested in the e-Learning course because I know absolutely nothing about a computer. I host The Koha Shed - Te Whanau a Apanui Ki Poneke - and have now taken on The Koha Pallets. This is run at my home and, through facebook, I also have a couple of Volunteers to help with the operating of The Koha Shed. Because it is all Social Media involvement I need to scrub up on my knowledge and skills that I take away with me from this computer course here today.

‘This course has helped me out and to understand the computer more. I really love the copy and paste. It is so time consuming - what used to take a half a day to write a post to sharing it to another page only takes me now a few seconds. The other is Google - love this so much and having a tutu with the computer is making me more confident to use the computer better.

‘I would like to thank the Tutors and the extra helpers for teaching me how to use the computer properly and understand it. Also not forgetting the colleagues I worked alongside from day one to the end. I cannot wait for graduation next week. I may be interested in the Whitireia Computer course if it fits in with my children. I recommend this course to everyone, even to those who visit The Koha Shed - Te Whanau a Apanui Ki Poneke’. 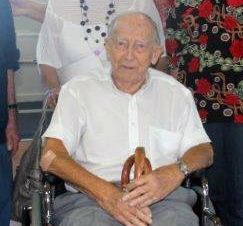 During a lull in proceedings there was an opportunity to speak to the oldest ever graduate of the programme, Douglas Hare, aged 88.

Asked what made him do the course, Doug said, ‘I was getting bored with asking my grandchildren how to do e-mails for me and I wanted to keep up with the world of computers.’ Asked how easy he found it, he replied, ‘It was relatively easy and it’s never too late to continue learning.’ When asked what difference his newfound knowledge will make to his future, Doug replied, ‘I will use it for research. I am very fond of astrophysics, and so is my son. I used to work for the clerical branch of the railways. My son and I watch all the programmes we can on television and now we can explore even more on the computer.’ Doug is very pleased that he did the programme. He said it was like waking up to a sunrise after sitting in comparative darkness – everything starts to unfold.

Asking Douglas’s daughter, Ngaire Hare, who also undertook the programme, what difference her father’s graduation had made to her, she replied without hesitation, ‘Now he can answer his own emails!’

Which all goes to show, 'you're never too old to learn'!

You're never too old to learn

You're never too old to learn
+ Text Size -
Do NOT follow this link or you will be banned from the site! Original generation time 3.0204 seconds. Cache Loaded in: 0.0686 seconds.