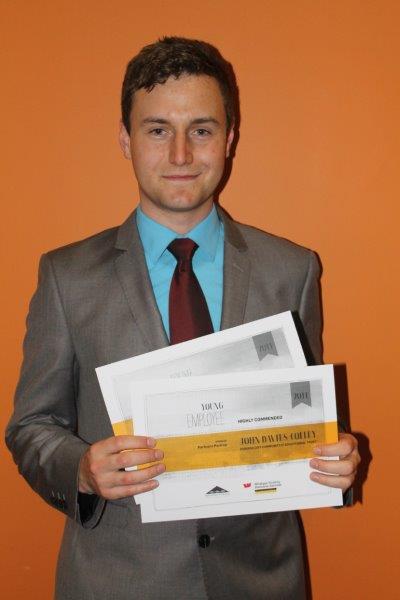 John Davies-Colley was one of six finalists in the 2014 Porirua Business Awards, Young Employee of the Year in September of this year

He was awarded a highly commended in this category. He has been working part-time for e-Learning Porirua and studying Computer Science at Victoria University of Wellington.

Recently, John won an internship with XERO, the large New Zealand Cloud Accounting application company. His input and work in the Cloud infrastructure team was quickly recognised and valued by ZERO while he completed his studies. ZERO have told him that they want to employ him full-time once he graduates.

John continues to do a little part-time work for e-Learning Porirua and has even rebuilt the server to industry standards over a weekend recently.

We (e-Learning Porirua) are very proud of John's achievements and wish him all the best for the completeion of his studies and his future career.

Finalist in Porirua Business Awards
+ Text Size -
Do NOT follow this link or you will be banned from the site! Original generation time 2.8498 seconds. Cache Loaded in: 0.0212 seconds.