A refugee story with a happy ending 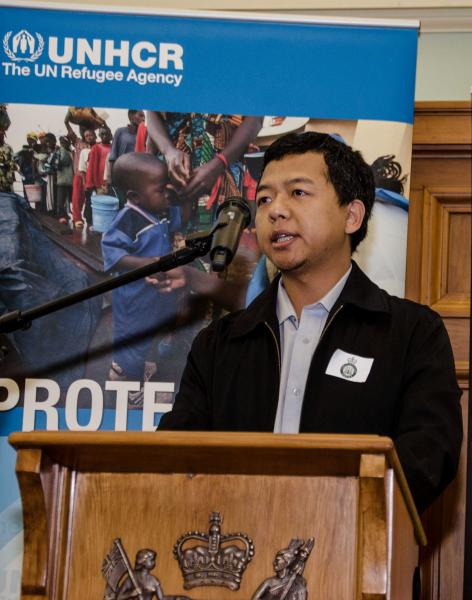 Dennis Maang was born in Myanmar/Burma. A leader of a Catholic Church youth group and founder of the group’s publication, Dennis was the subject of unwarranted attention and in fear of his safety was forced to leave Burma in 2002. Dennis travelled through a number of countries, until he arrived in Malaysia in late 2002.

“In September 2002, when I was in Malaysia, I applied to the United Nations for protection and to obtain refugee status. They gave me a paper, a registration number and, after 6 months, they gave me an appointment to come back,” recalls Dennis.

The appointment was the first of many. Each appointment raised Dennis’s hopes of finding a permanent country of residence and a place to start again.

“Nobody ever explained to us what the P stood for. But it made no difference whether we understood what it meant. All we needed to know was that we could not miss an appointment. That was all that mattered.”

In 2005, after five years of appointments, Dennis finally received the news he had been longing to hear: he had been granted refugee status and would be resettled in Aotearoa New Zealand.

He arrived in Auckland in February 2008, and was resettled in Wellington in March of that same year. Upon arrival, Dennis – as is the case with most newly-arrived refugees – did not take time to recover from the challenging and long process of requesting refugee-status. He immediately began developing a new life by applying for every job vacancy he could.

Armed with his Bachelor of Science in Physics, he was hopeful of finding work in his field of study and expertise.

“But my qualifications did not apply here in New Zealand. The only job I was able to get was as a kitchen hand at a restaurant, washing dishes”, says Dennis. “I struggled with English. My confidence and self-esteem were not doing great, and I started losing hope”.

Letters rejecting his job applications added to his stress and to his sense of despair.
“I became convinced I was never going to be able to find a decent job. Still, I was determined to improve my English.”

In 2008, he enrolled at Victoria University’s English Proficiency Programme, as well as in the Foundation Studies Programme, which is an eight-month programme designed to prepare international students for university study in New Zealand.

“While studying, I was able to get a part-time job at a café at Victoria – this gave me hope,” says Dennis.

Then, some months later in 2010, he came aware that Refugee Services was looking for a Burmese cross-cultural worker.

“I didn’t think I could get the job,” says Dennis. “But my commitment to my community gave me the impulse and motivation to apply for the role. I wanted to tell others not to lose faith, and to remind myself that I shouldn’t either.”

Dennis’s application to Refugee Services was successful: he got the job.

“It changed my life. Obtaining the role as cross-cultural worker gave me confidence. It made me believe in myself once again.”

Dennis’s work for Refugee Services as a cross cultural worker and, most recently, in his new role as a caseworker, involved supporting newly arrived refugees from Burma/Myanmar and other countries.

“I understand the fragile condition most refugees arrive in, and how important it is to receive encouragement and support during the initial few months after arrival,” says Dennis.

He understands, from his own first-hand experience, the challenges and difficulties facing those who arrive here as refugees.

“When you realise you have to start again, many times from zero, you can become easily overwhelmed,” he says. “Especially if, like me, you don’t have your family with you to give you support. On the contrary – you are always worrying about their safety and well-being, thinking when will you see them again.”

In his role as a case worker, Dennis handles individual and family cases of newly arrived refugees. He helps refugees better understand New Zealand society during their first year in New Zealand, a crucial period in the resettlement process.

He ensures that the needs of new arrivals are met by establishing linkages between them and appropriate service providers, and advocates for their needs where he finds gaps in the resettlement processes. Dennis also facilitates links between refugees and the Wellington Myanmar community.

His commitment to his work motivated Dennis to seek professional development opportunities and he applied for a scholarship to further his studies towards a Social Work degree. In December 2011, he received the news that he was granted the scholarship.

Also in 2011, Dennis received even more important news: his brother had approval to resettle in New Zealand. After nine years of not seeing any of his family, Dennis was reunited with his brother in December 2011.

Dennis is now working with Red Cross Refugee Services in Porirua and also in the Hutt Valley. E-Learning Porirua will continue to train groups of refugees from Myanmar as and when the need arises.

Dennis says, “my advice to refugee-background people is: Don’t rush. Take your time to settle in. Don’t upset easily, keep going, keep your hope, don’t give up.” He pauses, and then smiles. “Things do work out.”

A refugee story with a happy ending

A refugee story with a happy ending
+ Text Size -
Do NOT follow this link or you will be banned from the site! Original generation time 2.8617 seconds. Cache Loaded in: 0.0211 seconds.